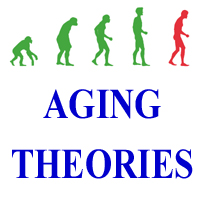 As can be seen from the figure (U.S. mortality data), human death rates from all causes in developed countries increase exponentially starting at about age 30 and doubling approximately every ten years. We can define age-related disease or condition as one where the incidence and severity drastically increase with age to the point where aging is by far the main cause. Massively age-related diseases include heart disease, stroke, cancer, arthritis, cataracts and other vision deterioration, hearing loss, and loss of strength and balance. Alzheimer’s disease is essentially unknown in young people. Death rates for 40-year-olds are approximately twice the rates for 30-year-olds so we can consider that nominally half of deaths in 40-year-olds are caused by aging along with three-quarters of deaths of 50-year-olds and so forth. Aging and age-related diseases cause about three-quarters of all deaths in developed countries and represent more than half of medical research and health-care costs. 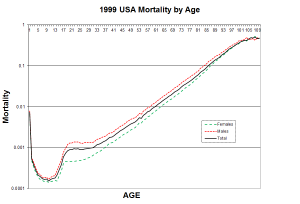 There is wide agreement that there are different immediate or direct causes associated with each age-related disease and condition. The immediate causes of heart disease are not the same as the causes of cancer or the causes of arthritis, etc. Western medicine is largely based on the idea that we need to find different treatments and pharmaceutical agents to treat different diseases and conditions. This approach has obviously been substantially successful in treating age-related diseases.

The current trillion-dollar question is whether or not aging, per se, although obviously the main cause of the age-related diseases is itself a treatable condition. If so, treatment of aging could be used in parallel with the existing medical paradigm in our efforts to treat age-related diseases and conditions. As described below, different aging theories suggest drastically different answers to this question.

Fundamental limitation theories, wear and tear, stochastic, etc. strongly suggest that aging is an untreatable condition. We can find treatments for individual symptoms such as cancer and heart disease but we cannot find ways to treat aging, per se, as it is the result of fundamental limitations that could not be overcome by the evolution process and are very unlikely to be overcome by medical advances.

Modern non-programmed aging theories suggest that aging is not the result of fundamental limitations but rather the result of a large number of different independent factors as explained by George Williams in 1957. Unlike inanimate objects, living organisms obviously have many biological mechanisms for repairing or preventing damage. Wounds heal; dead cells are replaced; immunity is acquired, and so forth. Therefore humans and other organisms reasonably would have developed biological mechanisms to delay the appearance of cancer, other methods for dealing with the different damage mechanisms associated with heart disease, and myriad other mechanisms for delaying the occurrence of other age-related diseases and conditions.

This concept explains why different mammals have such different internally determined lifespans while having very similar biochemistry and similar symptoms of aging. This idea assumes that all of the different maintenance and repair mechanisms each presumably independently evolved and retained just the effectiveness needed to deliver the minimum necessary species-specific internally-determined lifespan called for by modern non-programmed theories based on Medawar’s evolutionary mechanics ideas.

These concepts support the accepted idea that we can find different ways to treat each specific age-related disease. However, these concepts suggest that there is some ultimate age beyond which further progress in extending human lifespan would cease because eventually every aging symptom would appear at catastrophic levels. They further suggest that there is no treatable common factor behind age-related diseases and conditions. These theories therefore support the current medical paradigm of ever-increasing specialization by disease, disease sub-type, and even personal disease variety.

Modern programmed aging theories suggest that a second path toward combating age-related diseases and conditions exists. These theories propose that the age-related diseases and conditions are coordinated by a biological aging program that stages the appearance of aging symptoms to result in a particular optimum lifespan for each species population. In addition to finding better ways to combat each particular disease we can look for ways to interfere with the aging program and therefore generally delay or reduce the severity of age-related diseases especially in older individuals. If valid, this is an exciting development because two different approaches can be used against age-related diseases. Because the anti-aging approach is new, we could reasonably expect “low hanging fruit” and rapid progress.

The effectiveness of an attempt to interfere with the aging program depends on one’s concept of the nature of that program and specifically the degree to which the program is common to the many age-related diseases and conditions and the extent to which the common program can control each symptom. For example, if senescence is controlled by a program similar to the one that controls mammal reproduction, and aging is a genetically programmed phase of life, then we could expect rather dramatic results. If we wanted to delay or advance puberty that would certainly be possible. There is considerable theoretical thinking and empirical evidence suggesting that, like reproduction, aging is controlled by a complex common program involving signaling (hormones).

For more discussion of the nature of the aging program and supporting evidence see: